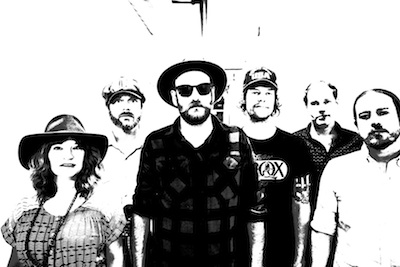 Fort Worth-based alt-rockers Telegraph Canyon will be performing at The Stone Fox in Nashville on Tuesday October 6th.  The band is on tour supporting their latest record, You From Before, released at the end of July via Velvet Blue Music.  The album is an intensely personal record; “Every song is about a person or a relationship I’ve had,” says frontman and songwriter Chris Johnson, “many of them women, some romantic, some not. The songs aren’t all about breakups, but most of these people aren’t in my life anymore. Some of them were only there for a day or two but affected me in a huge way.”  Since the release of the band’s sophomore album, The Tide and the Current, Johnson’s life has had its share of obstacles–a difficult divorce, a period of homelessness, living in an RV in Fort Worth, various line-up changes in the band, and the pressure to avoid artistic redundancy, all of which required him to navigate unfamiliar emotional terrain.

Some might think it would be hard to relive those memories while performing these songs of hardship every night, but Johnson says, “I think I’m just grateful to have some kind of heavy emotion to pull from when I perform them.  It isn’t really in my nature to just like go on autopilot when I’m performing, it’s really exciting to me and I love doing it.  Sometimes, songs are just songs, but I feel like I have songs now that are maybe a little more important to me than the songs I had when I was younger. I think that there are some songs that I started writing about something that was going on, and it took a while to write the song, the situation changed in the middle of writing it, and I kind of adapted the song to go along with what happened.  In some ways hat was therapeutic, it allowed me to put a bow on these hard things that I went through, it was done, and I could see it in this whole well-rounded way.  Tension and release.  I really don’t find it difficult to perform the songs on the whole, at least not right now.  I’m just excited to play them for people.  I can see the positive side of things, all that change has been a good thing, and I feel like, this is kind of corny, but that I’ve won.  I feel triumphant in some way, getting through it.”

Changes in life, changes in the band, and the long passage of time between the last album and You From Before have resulted in a change in musical direction.  “It had all been coming anyway,” says Johnson.  “I’ve never been one to be married to a certain style or scene.  I think on a whole, there was no way that this wasn’t going to happen, but a lot of what did happen was deliberate, and the songs aren’t really that much alike on the record. There are a few songs that are similar, and I feel like I was trying to make a statement, or at least have a bunch of songs that were compatible with one another but that still sounded like their own thing.  Sound-wise, it’s hard for me to say what the shift was, I can’t say it’s more of a country record or something like that, but I can point to it being a little more rock n’roll in a way.”

The band is currently on tour, and happily so, Johnson explains; “It’s been great. I’m a road dude, that’s all I want to do, it feels like summer camp all the time.  Touring for the band itself, we’re a bunch of dudes having a good time.  It’s the highlight for me.  When we get a record done, we’re all looking at each other going like ‘you ready to go? Let’s go!’  We’re going to be touring a lot in the next year, and recording during the short breaks we’ll have.” Lucky for us, they’re headed to the Music City; Johnson says, “I love Nashville.  It’s like one of those cool towns to go to where people really like to listen to music.  I feel like people there are ready to hear something. I just love Tennessee anyway, it’s beautiful, and I love charming Southern people.”  Don’t miss Telegraph Canyon’s show at The Stone Fox! They’re performing with Kim Logan, and another blog favorite, swoon-worthy Richmond, Virgina-based indie supergroup Avers.  HAVE. MERCY.