Brooklyn-based BOYTOY emerged in 2014 with a ferocious live show, and a self-titled debut that caught the attention of fans and critics from outlets such as Noisey, Stereogum, SPIN, The Village Voice, Time Out New York, NYLON, and Rolling Stone. The band is gearing up to release their new album, Grackle, 11 tracks of no-nonsense rock n’ roll bangers, and are currently in the throes of an east coast tour, set to play The Stone Fox in the Music City on August 22nd, before heading out on a national tour in October.  I caught up with co-founder and guitarist Saara Untracht-Oakner recently to get the low-down on the deal:

Eo8:  What does each member contribute musically and personally to BOYTOY?

SU-O: We definitely have a lot of overlapping musical tastes, which are kind of all over the board.  We both play guitar so it’s interesting when we write stuff, we have to think about that, we were both in bands with bassists, and she (Glenn Van Dyke) plays more lead guitar stuff, and I normally do more rhythm stuff; because we don’t have a bass, I’ll fill in lower end while she does high stuff, and vice versa.  Then there’s Matt, our drummer, we all sing; the album is very collaborative.  I think we’re all pretty goofy; it’s cool being in a three-piece, I think we’re all similar, Glenn and I especially.

Eo8:  Tell me about making Grackle, which comes out in October via Paper Cup Music.

SU-O:  We spent the winter recording demos in Matt’s basement, he lives on Long Island; we’d all written a bunch of songs, brought them to each other and narrowed it down to 11 songs.  We took the demos in and started tracking the record in Philly, and then brought to Brooklyn for mixing and mastering.

Eo8:  How do you feel your band and your music has changed since the last release?

SU-O:  Well, we have Matt, that’s definitely a change.  We all sing on this record, it’s definitely faster and more straight-forward rock and roll with a 60s garage/surf vibe.  All the songs are like two to three minute bangers, it’s definitely more of a party album than the first record.

Eo8:  I heard y’all are surfers, I didn’t know you could surf in New York City!

SU-O:  Yes!  Glenn and I both grew up surfing; I grew up on Long Island and she grew up in Florida.  A lot of people don’t know you can surf here, but Rockaway Beach is pretty close to Brooklyn and it has great surfing.  You can just take a train out there, maybe 40 minutes on the train.  When we met, we kind of bonded over that, we have traveled to Puerto Rico together and surfed out there, we surf here when it’s good.  I think that definitely translates into our sound.  We always joke about the perfect day being going and surfing and then playing a show.

Eo8:  Does that ever happen?

SU-O:  That’s photo that my brother took, he’s photographer, his name is Jesse Untracht-Oakner, and he lives in Williamsburg. 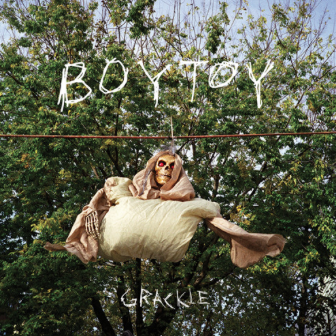 He also shot the photo for the cover of our first record.  I designed the layouts, and I wanted to carry over the same vibe or pattern with something centered in the middle as the focal point.  The first one is a smushed rat, and this one is the tress with the skeleton thing hanging down.  The insert of the vinyl also plays off the first record which was a smoking picture he took, it’s cool.  It’s a picture of Glenn and I standing about six inches apart shotgunning smoke from a blunt, it created a cool image.  We played off of that for the insert photos.  We used a bunch of friends to make the look cohesive and were able to showcase their work as well.

Eo8:  Is there any significance to there being a skeleton in the picture?

SU-O:  I liked the picture; it all ended up working out really well and falling into one thing.  The album is a lot about bad stuff, bad things, bad feelings, so it definitely goes with that idea.  Also, the name Grackle, a grackle is a black bird native to Texas and Central and South America, and obviously it being in a tree, and it kind of sounds like a monster name, so that also was fitting with the skeleton.

Eo8:  What music was inspiring you when you made this album?

SU-O:  A lot of Kinks, Lou Reed, some really good Mexican garage compilations, Zambian rock from the 70s, Black Sabbath, The Brian Jonestown Massacre, 60s and 70s rock and 90s psych revival.  Our tastes are all over the place.  I don’t think you can go “oh, this record sounds like this band,” you can take a song a pick out three or four bands that it might remind you of.

Eo8:  What is your live show like?  Are y’all pretty rowdy?

SU-O:  Yeah, we’re fun.  We have a really good time, the chemistry is cool between the three of us. Glenn and I both like to thrash, and we definitely feed off the crowd the wilder they get.  One of my favorite moments in a show recently was Glenn crowd-surfing while playing guitar, and they put her down at the perfect moment, right when the next part hit.  Those little magical moments at shows are what we’re looking for, for sure.

BOYTOY is performing at The Stone Fox with La Luz on August 22nd; tickets for the 18+ show are $10.00.  The show starts at 9:00 p.m., which allows plenty of time to sample some of the The Stone Fox’s delicious eats before the festivities begin!