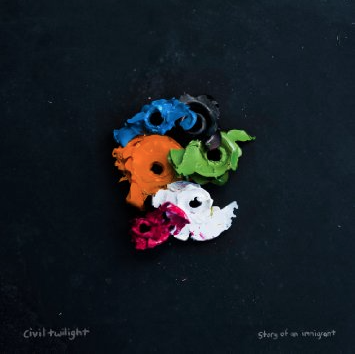 I’ll be honest, I haven’t really ever connected with Civil Twilight‘s music; their previous releases struck me as melancholy, and I just couldn’t get into it.  However, their newest album, Story Of An Immigrant, due for release this Friday, July 10th, has turned me into a die-hard Civil Twilight fan.  A Civil Twi-Hard?  I’m going with it.

The album begins with “Oh Daniel,” a song about reflection with a hint of regret; even so, its introduction (and the entire song, really) sounds as hopeful as the sunrise, which is appropriate given the opening lyrics, “The sun rose this morning/over my bruised head.”  The second track on the album. “Holy Dove,” is a synth-y rock anthem with a Muse-like sound and dramatic flair.

The band’s South African roots are on full display in the third song, “When, When,” which is also my favorite selection on Story Of An Immigrant; there is so much percussive movement – all kinds of drums, shakers, and things ringing and jingling, I seriously am in love with this song (and if you’re going to their album release show in Nashville on July 16th, I’ll be the one in the front row shaking what my mama gave me when this one gets played).

The title track, “Story Of An Immigrant,” an anthem in its own right, and a somewhat biographical song from this Nashville-based South African band; lead vocalist Steven McKellar sings, “Let the frozen carry me/Over water to be free/Where the other half begins/Where she waits for me.”  This song resonates with me a little differently than the others, and made me realize that “immigrant” doesn’t have to always mean someone who moves to another country; embarking on a new adventure or making changes that take you to new places in your life can make you a kind of “immigrant” too.  I like it.

Story Of An Immigrant is an eleven-song stunner, from McKellar’s ethereal voice, the enveloping rhythms and contributions made by every instrument and every player, the beautifully crafted arrangements and lyrics, even the colorful cover art created by the McKellar brothers; all elements seamlessly fit together to make a sincere and timeless work of art.  Great job Civil Twilight, you’ve definitely won me over.

One thought on “ALBUM REVIEW: “STORY OF AN IMMIGRANT” BY CIVIL TWILIGHT”