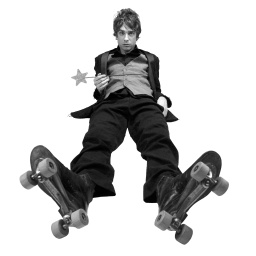 If I were a rock star, I’d want to be just like sElf’s Matt Mahaffey.

Matt Mahaffey is somewhat of a legend around these parts: the musical wunderkind of middle Tennessee by way of east Tennessee, record producer, recording engineer, multi-instrumentalist, co-founder of the prolific 90’s independent  record label Spongebath Records in downtown Murfreesboro, and founder and creative force for the alternative rock band sElf.  Still not familiar?  Ever heard the jingle for Expedia.com (Expedia dooooooot commmmmm)? Yeah, he wrote that.  He’s toured with Beck.  His music has been featured in television and film; his song “Stay Home” was featured in Shrek.  He wrote and produced the music for Nickelodeon’s Ni Hao, Kai-Lan, and is currently providing the songs and the score for Disney’s Henry Hugglemonster, and Nickelodeon’s Sanjay and Craig.  And…somehow, he’s managed to work his rabid (and downright patient) fans into a frenzy this year, releasing Super Fake Nice, the first sElf EP in almost a decade.  He moved back to middle Tennessee a few years ago, after living in Los Angeles for while; I found out that Matt/sElf was going to be performing at The High Watt on Thursday, December 4th, and squealed like a little girl when he agreed to chat with me.

I asked him if he knew what had become of the Spongebath building in Murfreesboro; he said “it’s probably a law office now.  I think it was a law office before we moved in there.”  I confirmed that it indeed has become a law office; Matt said “well, if you build a shack out in the middle of the woods, it will turn back into dirt eventually.”  I love it.

When sElf got dropped from its label (DreamWorks) in the early-mid 00’s, Matt and company got burned out on trying to be rock stars.  DreamWorks farmed his talents out to its film and animation divisions to score music for productions like Shrek, Flushed Away, and Shark Tale, which caused Nickelodeon and Disney to coming a-knockin’.  At first, Matt the rock star bristled at the idea of scoring episodic television; then he realized how playfully creative and free he could be in this new arena.  How perfect a fit is that for the guy who made the fantastic Gizmodgery, a whole album recorded entirely using children’s toy instruments?

One of the worst things I can imagine would be doing the same thing every single day, over and over again.  Matt agrees with me…this year, he’s been scoring the second season of Henry Hugglemonster for Disney, doing a residency in Las Vegas as sElf, and released Super Fake Nice in July.  I have thoroughly enjoyed Super Fake Nice, especially the track entitled “Hey Hipster” that has continually made me laugh lout loud.  I asked Matt what his inspiration was for this one; “I was kind of reluctant to put that one on the EP; it’s one of those songs you’re either going to love or hate. I tend to balk at anything I don’t understand, and I still can’t really grasp the hipster concept, it kind of reminds me of goth kids or something like that.”

There’s absolutely an LP on the horizon; Matt calls Super Fake Nice a “ratatouille of stuff I had lying around.  I really felt the need to put something out there.  The reception’s been great, and if people want to listen to it, then I want to make it.”

While sElf isn’t a solo project, the primary catalog has been recorded by Matt in his studio.  The band is scattered around the country, so he’s been doing some one-off solo shows in places like Los Angeles, New York, and Las Vegas.  Lucky for us, this Thursday, he’ll be performing for the hometown at The High Watt in Nashville, along with Five Knives and Future Unlimited.  (Doors 7:30pm, Show: 8:30pm, Ages: 18+
$8 Advance / $10 Doors)