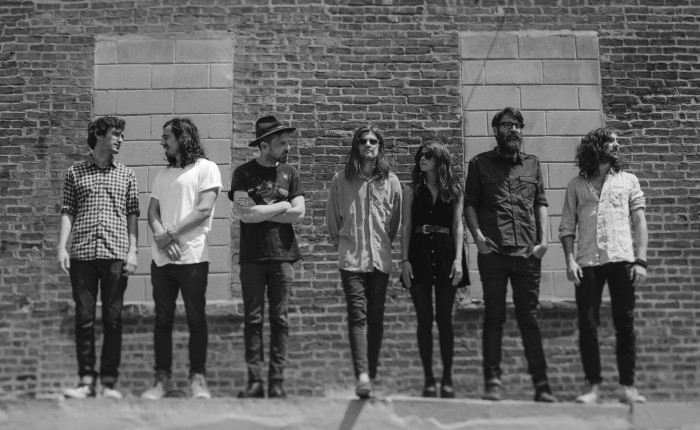 I caught up with Streets of Laredo’s Daniel Gibson, who was in Laurel Canyon recharging on a rare day off from the band’s brutal tour schedule.  The Brooklyn-by-way-of-New Zealand indie folk-rock band was founded by brothers Daniel and Dave, along with Dave’s wife Sarahjane.  In New Zealand, the brothers had been touring in bands which had naturally run their course; Daniel, feeling pretty uninspired about music, told his brother that he was over it all, he was giving it up, and was going find regular 9 to 5 job.  Dave talked him off the ledge, got Daniel a job at the t-shirt company where he worked, and the brothers made on demos on the side.  Eventually, they decided it was time for a life change, seeing great potential in moving to NYC.  And then, they just went for it.

Daniel attributes his love of music to his free-spirited mother, a veteran of an international all-women’s choir called Sweet Adelines, who used to “drag” him to her gigs.  She would “throw” him in the car and on the way, she would teach him how to sing the harmonies to the songs so he could help her practice for the gig.  Can I just say how much I LOVE this?

Touring in the States has proven to be a lot different than touring in New Zealand, where the music scene is amazing, but small. Daniel says you can accomplish a tour of the entire country in two weeks, and the population can only cater to a small number of musicians.  In the States, there is so much art, so much going on, all on a bigger scale.  According to Daniel, the landscape is like nothing else, so he doesn’t mind those long rides in the tour van where he can gaze out of the window and experience Americana.  However, I was told we Americans are missing out on Vogel’s, the most amazing, perfectly-toasting bread on the planet.  I’m intrigued.

You definitely need to give the band’s LP Volume I & II a whole lot of listens (you can even go to their website and download their song “Laredo” for free!), and catch their show when they come to your town.   If you’re near the Music City this weekend, you can see Streets of Laredo up close and in person with Max Jury at The High Watt on Saturday, November 22nd.